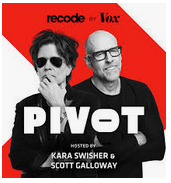 Scott Galloway does a podcast series with Kara Swisher.

Delightful, practical book on a difficult subject. 20th Anniversary edition just came out in Sept 2019. I’m currently listening to the 10 hour audible.com edition, which is cheaper than the hardback book.

It’s more of a

“go into a cave for six months

How to Break Into the Tech Industry, by Haseeb Qureshi

So I think I’m going to meditate on my Guru and cocoon in tech.

What pops out: The 5 most popular languages:

The most widely used programming language is, unsurprisingly, the venerable web language JavaScript.

JavaScript has topped the list of the “most popular” programming languages in the Stack Overflow survey for the past seven years.

The language has grown beyond its roots as a simple scripting language for the web, and with the help of frameworks like React is today used to build graphical user interfaces for web and mobile apps, as well as to create server-side software running in a Node.js environment. It can even be found in software controlling IoT appliances thanks to the flow-based development tool Node-RED.

Developers are a lot of things!

In case you forgot: