This article/ video interview is with Mike Novogratz, a veteran Wall Street trader who sees a lot of opportunity in the bitcoin ecosystem:

It started with a late-2015 visit to a friend’s startup in Brooklyn.

“I expected to see Joe, a dog and one assistant. Instead I saw 30 dynamic young people crammed in a Bushwick warehouse, coding, talking on the phone, making plans for this revolution,” Novogratz said. “Macro guys are instinctive. My instinct was, ‘I want to buy a chunk of this company.”’

The article mentions that he’s also starting up a $500 million hedge fund to invest in the crypto-space. 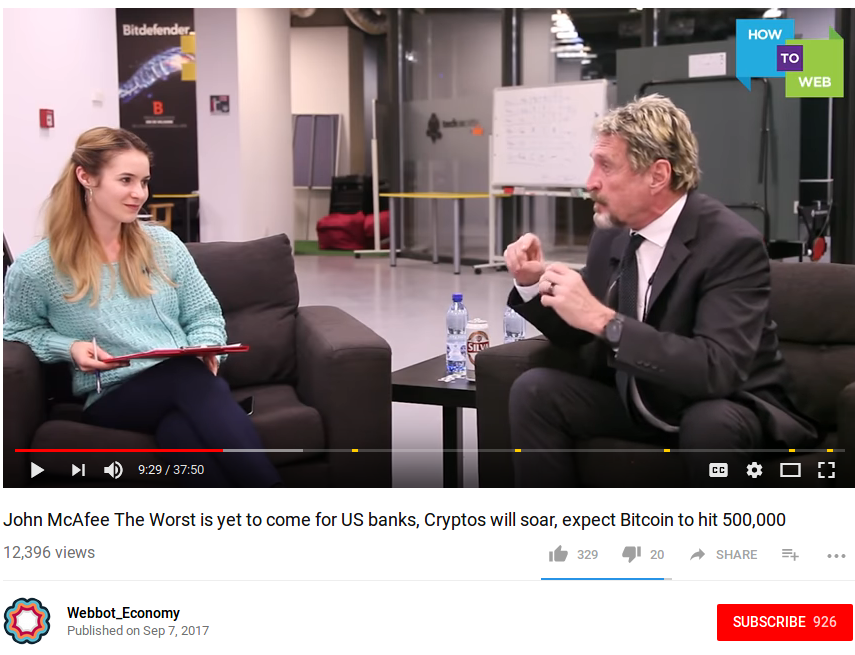 Not feeling so well today so I rested and watched an interview with John McAfee about the state of Cyber Security. John is an intelligent, outspoken character who started McAfee antivirus back in the 80s, then I remember him being in the news, on the run and being deported regarding his neighbor in Belize being murdered a few years ago. (He appears suspicious.) Now he’s peddling security software again, and crypto opportunities. I took some hopefully pertinent notes from the talk.

Interviewer: What’s the state of Cyber Security in 2017?

John M: We have none.

The anti-virus paradigm is no longer functional, it doesn’t work. And I’m the person who invented it. Viruses aren’t the problem, hackers are. It’s a reactive paradigm, and that’s the problem. We have to become proactive. (He’s developing a product “Sentinel” to ID the hackers coming in.)

Everybody exercises different degrees of privacy hundreds of times a day. We are humans, we live in an imperfect world.

How secure is Bitcoin? I think it’s extremely secure. On the other hand, people put crypto wallets on their smartphones, and over half of smartphones are infected with key-logging software.

If you have an online wallet, an online account, the next day your money may disappear.

We all have secrets, yes? So why are we giving our data to companies?

Why do we use the cloud? It makes life easy, I can access my data from anywhere. The Cloud is OK for some types of things.

Bitcoin is a New Paradigm of Money

Whether bitcoin or Ethereum or Monero or whatever, you need to Educate yourself, it is easy to lose your money in Crypto

Offline wallet: trezor, seed keys display on the trezor, not on desktop. Don’t keep your wallet on any device.

The world is on a dangerous cliff. We’re allowing these devices to master us, not the other way around.

At least a dozen big nation States have the power to bring down another nation’s power grid.

I didn’t hear anything about the $500K for bitcoin in the talk, but I may have dozed off when he said it. I did find he said that in twitter in July of 2017: “I Promise to ‘Eat My Own Dick’ If Bitcoin Doesn’t Reach 500k In Three Years”  Seems like just a bit of click bait.

What Are some good rules of research when looking at an Altcoin?

I was watching the above video, by Carter Thomas, a software programmer who’s knowledgeable about finance and marketing, and he mentions a number of useful indicators of a solid company:

For myself, I like to check out GitHub to see what the source code says: is there any developer/project activity, is the coin just a copy or fork of another coin?